skip to main | skip to sidebar

Walking Through the Cavern 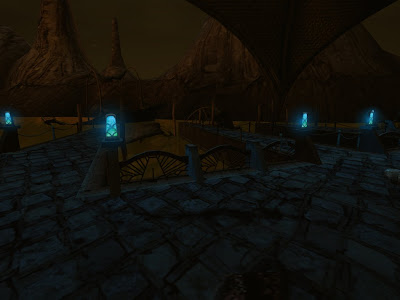 A lot of people are buzzing about the sudden loss of public instances in the Cavern, and I will readily admit that I'm surprised too. It's been a few months since the DRC left the Cavern, and now all of this is happening. The KI's are malfunctioning, the Lattice has downed all links to Public Hoods, and only the generic "Ferry Terminal" remains.
As I said, all of the books to Minkata, Jalak, etc. are all gone too, only the basic one's left behind. Whether it be Yeesha's will or otherwise, I can't do much about it, since the Museum and the Library are empty. For the moment, I'm stuck wandering around in what is now the silent city of Ae'Gura. I am glad I took sufficient photos of the Ages that are now gone.

I know many people are also leaving us, though I certainly have no intention of doing so. It's rather lonely being in an empty Cavern, and I've been asking some of the people who know enough about writing if it's possible to link independent instances back together, with little response. As it is, it sounds less and less plausible the more I think about it.
It is kind of peaceful to sit in the ramadas of Eder Kemo and write, but either way, I kind of miss company. I don't know much about the art of writing, so I'll leave the instances as they are. If we're lucky, maybe whatever happened will reverse itself. For now, I'm content linking where I can.

I've been reminiscing on my time spent here in the Cavern and, though I do hate to but it so bluntly, I realized how much it truly sucks that the exploration is being shut down. I know a lot of people will probably stay down here, and if I'm able, I'll certainly do the same for as long as I can. If I can, anyway.
I've been thinking along the lines of taking some books with me, though the more and more I think about it, that seems less and less probable, or respectful to the D'ni, for that matter. Yeesha probably wouldn't be too happy with me for that. But my Relto Book, I haven't heard about any reason not to keep them, and I'm sure Yeesha wouldn't care, she might even be thrilled that we would care so much about the Cavern.
But there will be no more Minkata, no more Jalak, no more Eder Delin, or Tsogal, or Pod Ages. Won't have any more access to them. It's a rather depressing thought, though I'll still have a few books in my bookshelf for awhile, though it won't be getting any bigger. And I'm still beating myself over missing the Farewell Party.

There are so many places we haven't explored (Ehh, Pento?), and might never explore. But I think there's a good chance it'll be coming around again in a year or two. You'll all see.
Oh, yeah, and I thought about it and thought it would be a neat idea to include a picture with all my posts, just my own little thing.

"The Bahro are coming from inside the Age! GET OUT!!" - Gondar, when I start hearing a pounding noise in my Relto
Posted by Xavius at 5:36 PM No comments:

The second PhotoQuest showing was today, pretty neat. I completely missed the first one, and I'm probably going to miss most of this one. Sending from my KI in Gallery 1 right after the sixth rotation, and probably the last one.
Some pretty cool images out there, a few that stand out. Like Carl Palmner's neat Jalak arch and Clean & Sober's inside-out Ahnonay (Must be the wierdest and coolest picture I have ever seen.) I get to see a whole bunch of cool photos without having to go see them. Some people have real talent, and even though I won't get to see them all, definetely cool.

Ktahdn was DJing and giving out pizza, so it was awesome all around. Short post, but meh.

Okay, I know this is sort of a pointless post. But something interesting happened today down in the Cavern I felt that i had to post somewhere, so, all you critics out there, you might as well get over it.

I was down in the Cavern today, and in Uru Obsession's Neighborhood, and there was an arseload of people there. Like twelve or so, and I was weirding out because I didn't see a single one of them, like out of an old Twilight Zone episode. I could hear them, but they sure weren't there. I mean, I apparently walked right through DaytonaKit at one point up by the podium in the Community Room.
And Jacuru and her both sent me some pictures to which I showed them one of my own:

They are, annoyingly, a bit small, but if I make them any bigger, just a bit, they get ridiculously fuzzy on Blogger. But, if you can't tell, the first one is me in my Indiana Claybourne get-up all alone. The second one, taken just moments after I sent the first picture to her, is from DaytonaKit's KI. I'm in the same spot, just turned around a bit, you should be able to spot me if you really look.
It's probably some sort of Neighborhood Instancing malfunction, two people linking to the same Age at once, who knows. But I thought it was pretty nifty. Adam_Reith, whitesparrow, and Fah linked in at their respective times after me, and I could see them, and they could see everybody else, which poses more questions.

But, as it is, I thought it was pretty cool.

In other news, it's also the anniversary of the current opening of the Cavern. Today, it's been exactly one year since it was reopened. But, ofcourse, the DRc were still around then. It's kind of hard to believe actually, and I still don't have all of the Calendar Sparks..

"So, what should we do since he can't see us?" - DaytonaKit, being devious
Posted by Xavius at 2:35 PM 2 comments:

Under the Christmas Tree 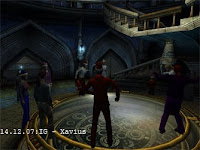 Well, I decided to try out Tweek's nifty KI Serial Code, and it seems to have turned out pretty good as far as I can see, though this is something of a test post, it's not why I'm posting.

Someone seems to have decorated Sharper's office in the City, kind of curious as to who, considering the DRC have all up and left, whether or not they're coming back. The menorah, Christmas trees, and such. We've all resorted to Sardines, Survivor etc. just to survive the boredom, and I see a lot of people vanishing. Honestly, I'm pretty impartial either way, I was gone for a couple weeks nerding out too, so.
Tonight our little Christmas thing-a-majig's started up, starting with Under the Roots Christmas tonight, with Ktahdn playing Christmas tunes till the sun comes up (Or as close as it gets, anyway.). Not to mention scaring certain someones about not having Little Drummer Boy in the playlist, ahem.

Anyway, it's shaping up to look like a good Christmas this year, both above and below the surface, even though my roomates are going to round most of the Christmas money up for a second computer, I'm still setting my eyes on finally getting a bloody iPod..

A Lesson in Proper Bahro Names

Well, this is mostly an interesting-tidbit-that-I-want-to-post sort of post, but eh, why not inform the masses?

Well, basically, a few days ago, K'laamas sent an e-mail to RAWA about the names of the Bad Bahro, or if Yeesha had names for the different sides, or something similar. But the point is, recently, he responded back. Apparently, it was what Dr. Watson had heard Yeesha call them while he was away from the Cavern.
Nekisahl are apparently what the general Bahronoir (As they were formerly called!) are called, which means, basically "bent, twisted, or distorted." Which makes it into the Bahro Nekisahl.

And RAWA also sent "Nekisahloth" which, it seems, is apparently the name for the leader of the Nekisahl who Esher took his Bahro skin from the shoulder of. And it basically means "one who is bent, twisted, or distorted." WHich is creepy yet neat.

Plus, since this is somewhat more "serious" than what I generally do, Donahoo is back in the Cavern with the D'ni Cocktail Party every other week, the next of which is two weeks from now. And the Karaoke Party is happening tonight, which I am, ofcourse, going to attend. I swear, sil needs to, I dunno, make a "Best of Karaoke Night" thing or something, because, as I said in a previous post, we have an insane amount of insanely good singers in the Cavern.

"I swear, everytime I go into the Space one, I hear Kirk's 'These are the voyages...'" - Wulf, talking about the Space Sphere
Posted by Xavius at 7:07 PM No comments:

Wow, the DRC are all gone. Every single one of them. Plain and simple.

Sharper left too, atleast temporarily, it seems. I don't know where Nick, Engberg, and Watson are. but the only person that is still around for sure is Phil, as prophetic as always. I mean, what is going to happen now? Seriously. the Bahro are at war, and we're all alone down here. Again. But this time, there are hostile creatures flying around.

Yeesha is back too, assuming she was gone. Phil and Watson mentioned something about her being in Releeshahn, or just about. All I know is, she appeared in K'veer, announcing that the Bahro are at war, and some have chosen evil. Some have chosen revenge. She says she's going to distract them or something along those lines, it was so mystifying I found it hard to pay attention. All I know for sure is that she's here, again.

But what will become of the Cavern, I mean, we are completely ungoverned. I mean, if nothing else, the DRC have a whole stack of unreleased Ages, some of those containing Pento, and Kahlo, and many others I would certainly like to get into.
I mean, I was thinking about it today, maybe we could try to start a new system of Five Lords, I know that's a bit far-fetched and such, but it would be a neat idea. It's better than complete anarchy and knocking down DRC barriers and ignoring all previous restrictions.
But maybe Yeesha will finally take a step up, with the threat of the Bahro, and the disbanding of the DRC, and she will be our new leader. She, herself, can be a bit eccentric at times, but it would be good to have someone who truly knows the ways of the D'ni guiding us.

And, you know, what happened to those Maintainer suits?

"Destruction is coming. It is almost here. I will delay it as long as I can but, in the meantime, you must find a way. You must make a home. Destruction will be here soon." - Yeesha, near the conclusion of her speech
Posted by Xavius at 7:40 PM No comments:

Older Posts Home
Subscribe to: Posts (Atom)
Xavius Claybourne, Explorer Unordinaire, at your service! Welcome to my blog, the recordings of the weirdest explorer to ever hit the Cavern! Don't hit your head on the way out!


Mister Cloak had an ingenious idea the other day, and invited everyone to get fireflies in his Kemo and gather in the tunnel. You can see what happened.